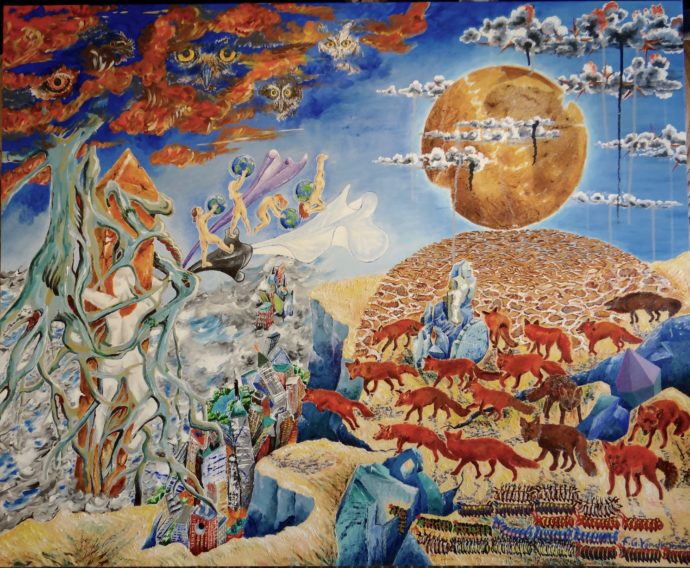 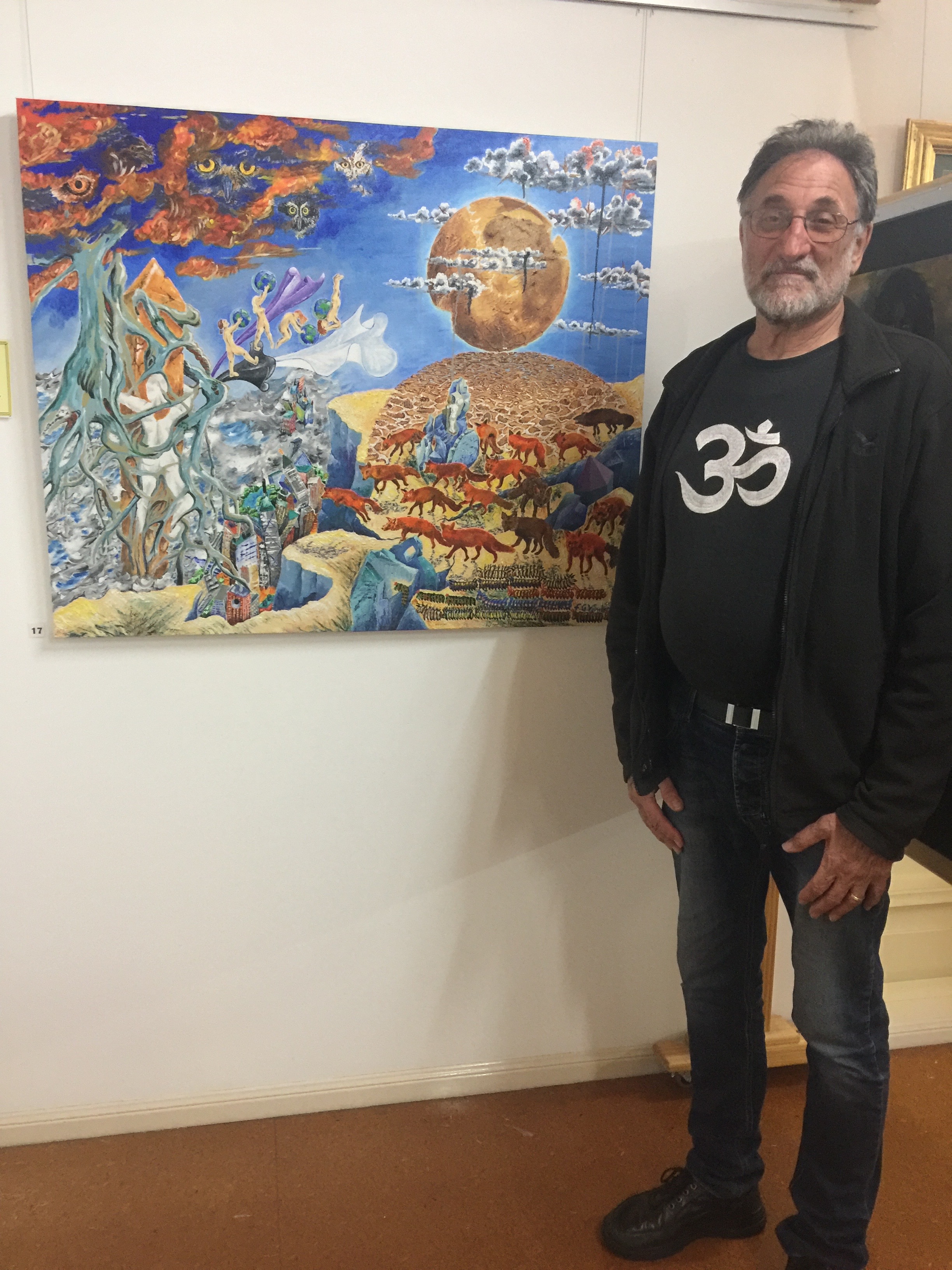 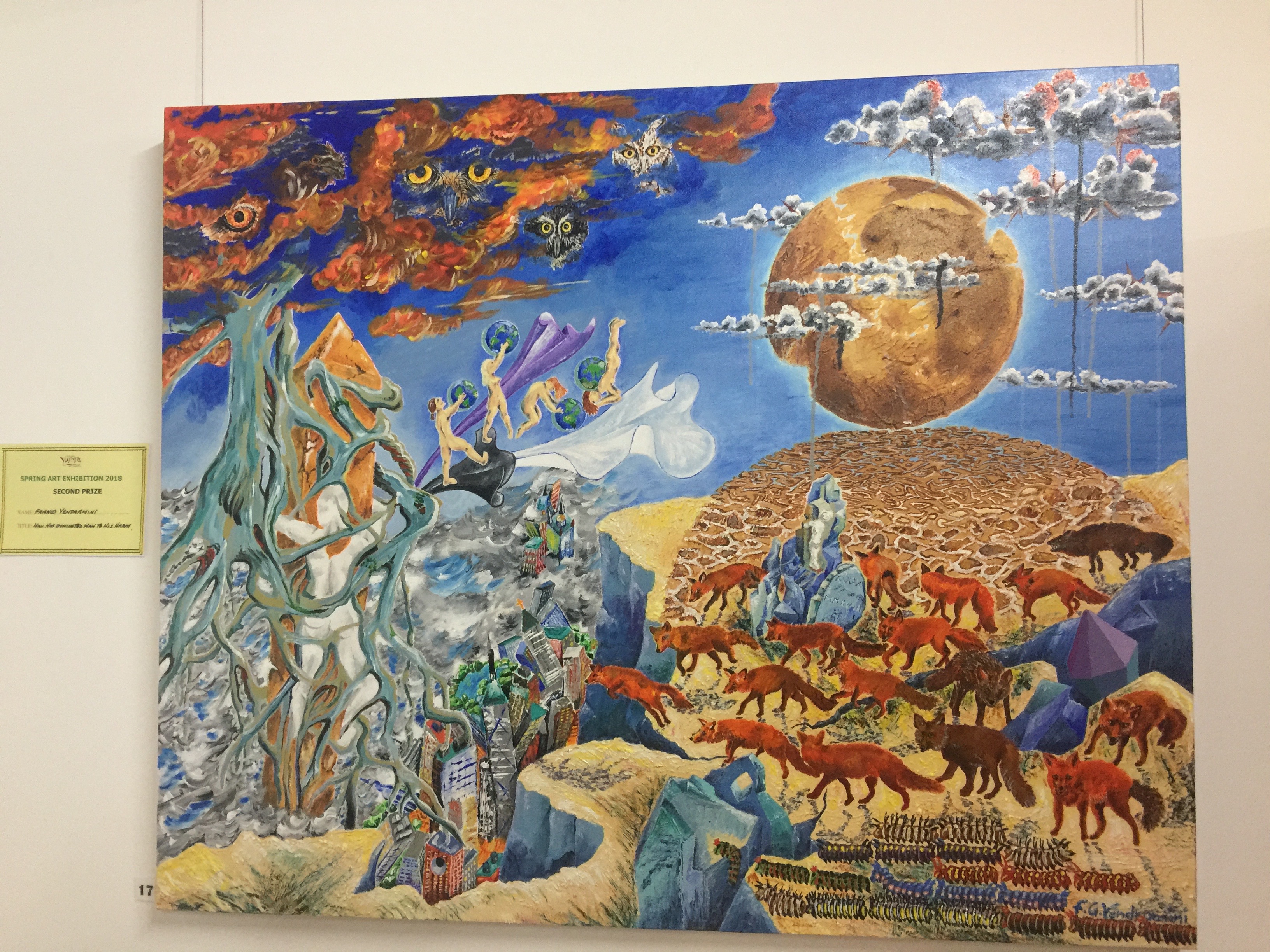 “Man Has Dominated Man To His Harm….” – A Supraliminal Perception

The idea of creating this painting was born by the World’s happenings and external influences on me and of today’s situation I see this world finds itself in.

First, I wanted a ‘world’ on top of the canvas and its reflection on an animal below however, it was almost impossible to represent that. The answer was to introduce the Foxes and Caterpillars for their collective names as: ‘World and Army’.

The destruction of mankind or the ‘abusing’ of ourselves is painted on the left of the painting. With numerous objects/animals/items I have considered: an obelisk and a large rainforest tree with an enormous root system manifests strangling ‘man’ – I found appropriate and fitting the meaning and being part of this painting.

The bare, cold cliffs and destruction are represented as a ‘sunken’ city. There is a cross hidden somewhere in the rocks.

One can see the image of a MAN on the obelisk and connected with the 4 human figures, gives the spelling: MAN-k i n d.

The 4 Human Figures are also ‘playing with a ball’ – which represents the World!

The Owls in the upper part of the painting represent ‘The Parliament’, being also the collective name, the ‘overseeing and representation of ourselves/mankind’.

The ‘Desert look-a-like Earth’ is reflected towards the foxes at the same time also reflecting our Society. The ‘thorny clouds’ add to the mystery of what the artist was thinking while painting them.

And so, the Cycle repeats itself.

I acclaim Artist Salvador Dali in my highest esteem. I tried to only get close to ‘HOW’ he could have been thinking while he was creating some of his Artworks.